Translate this page
Other languages:

Project SEKAI COLORFUL STAGE! feat. Hatsune Miku (often shortened to 'Project SEKAI') is a rhythm game for iOS and Android. The game is a collaboration between SEGA, Colorful Palette from Craft Egg and Crypton Future Media.

The pre-registration was originally set to begin in late April, but it was delayed until further notice due to the COVID-19 pandemic. At the fifth episode of Project Sekai Colorful Broadcasting Station, it was announced that pre-registration would begin on July 22nd. They set some goals, when this number of preregistration is reached, there's a reward for everyone who downloads the game at the release.

The goals were set from 100,000 to 1,000,000 preregistration, and in September 2020, 1,000,000 pre-registration were reached! Everyone who downloads the game at the release will have all the rewards. The game released on September 30th, 2020, in Japanese only. The staff are gradually starting to consider an oversea release in the future but nothing more at this time.[1][2]

On September 4th, 2020, a demo for the game titled Project SEKAI COLORFUL STAGE! Rehearsal Edit was released, showcasing the rhythm game itself, along with the Virtual Live feature, which had a schedule as to when each unit would perform.[3] The songs featured in this demo were Hibana -Reloaded-, Sweet Magic, and Tell Your World, each having all five levels of beatmap difficulty. The demo ended on September 11th, 2020, and has not been playable since then. 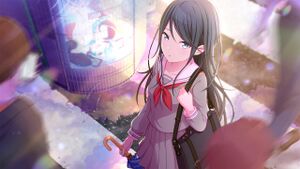 Ichika looking up to Miku.

The game is set in Shibuya, Tokyo. A girl named Hoshino Ichika, walks through the streets and she sees an LCD screen displaying Hatsune Miku.

Upon returning home, she discovers a song named "Untitled" on her smartphone. Out of curiously, Ichika plays the songs, only to get surrounded by a white light and arrive at an unknown place. Hatsune Miku stands in front of Ichika, welcoming her to Sekai and inviting her to sing together.

The game features 20 new characters, split up in multiple groups: Leo/need, MORE MORE JUMP!, Vivid BAD SQUAD, Wonderlands×Showtime, and 25-ji, Nightcord de. Each of the groups has one or more Virtual Singers advising them. 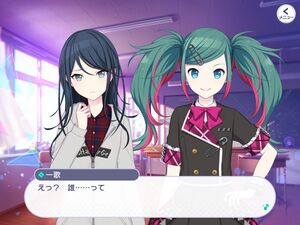 Hoshino Ichika talking to Hatsune Miku (Leo/need)
Players can switch between the real world and Sekai. You can travel between the two worlds using "Untitled" songs.

Conversations are voiced and will be animated using Live2D. 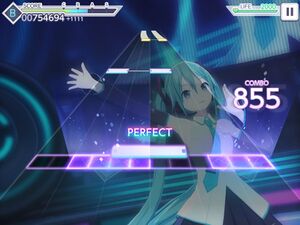 Screenshot of gameplay.
Players have to tap, slide, and flick to match new free-form rhythm notes. Color Palette wanted to create a game everyone could play, regardless of skill.

Some songs have 3DPVs, but players can switch to an 2D background if they want. Not every song will have a 3DPV. This is because there's a huge variety of VOCALOID songs and not every song can be accompanied by dancers. 3DPVs are saved for more fast-paced songs. 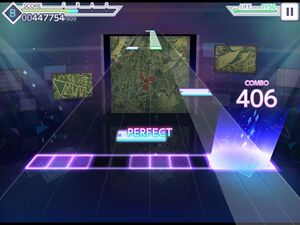 An example of Doctor=Funk Beat as a 2DPV.

A list of current announced songs can be found here. More songs will be added. There are plans to continually add more songs to the game.  Songs that weren't originally sung by one of the Piapro characters may be added to the game as well.

On February 25, 2020, a song contest was announced. The winning song will appear in the game, although only as 2DPV. Submissions are open until April 30, 2020. The results for the contest is revealed at the first episode of Project Sekai Colorful Broadcasting Station.

They announced in September 2020 that a new song contest will be held. 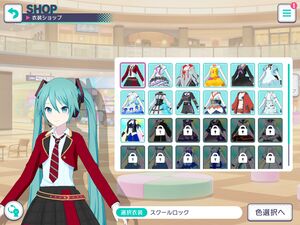 Screenshot of the Clothing Shop.
There are a variety of costumes that the characters will be able to wear. Some have color variations. One way to gain costumes is to buy them. Other methods of obtaining costumes are currently unknown.

In November 2019, a costume design contest was held. Two designs would be chosen; one for girls and one for boys. The winning designs will appear in the game. The winners were Kori (girls' design) and Ei-Flow (boys' design).

They announced in September 2020 that a new costume contest will be held.

There are 5 levels of difficulty:

Note: To unlock the Master difficulty on a song, you need to beat the Expert difficulty with less than 5 GOOD Judgements.

The Virtual live is a mode where you can go to a live concert, similar to Augmented Reality (AR) or a Vocaloid Concert.

You can see players all around the world and your favourite group performing. Encourage them with your penlight and items. First, when the live hasn't started yet, you're in a room with other players waiting it starts. You can talk with them by using the chat or sending emotes. You have also a shop where you can buy with your virtual coins accessories and set for your skin, penlights, and actions (move). You can use your penlight and your actions in the live only, and you have to put your skin in the room before going into the live.

When 10 minutes are left before the live starts, you can go to the live room and wait. The live will start at the hour displayed on the ticket in the virtual room menu. You can change the colour of your penlights do actions with your penlights, and send items. You can do emotes here too. When the live has finished, you can leave.

Retrieved from "https://projectsekai.miraheze.org/w/index.php?title=Project_SEKAI_COLORFUL_STAGE!&oldid=22740"
Category:
Cookies help us deliver our services. By using our services, you agree to our use of cookies.